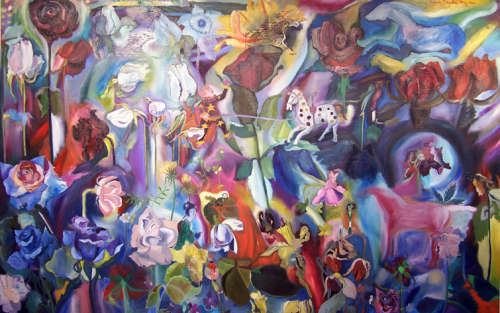 Please join us for our Opening Reception on Thursday October 5, 7-9 p.m. Everyone is welcome. The exhibit is on display October 3 - November 27, 2017.

Artists' Statement
Contemporary Realism - my primary subject matter is the land and what goes on around the land; but also what goes on around the farm and house. In the paintings you could see the fields through the four seasons. In several paintings you can see my favourite Indian red and milky white china set sitting on ploughed fields. In later paintings I dissembled the china patterns, or I have the cups and saucers floating between wildflowers, horses, stars and landscape. Dream-like, little stories have been captured in ethereal space, like the Japanese paintings our impressionist painters of the late 1800's loved so much. The china porcelain that I am attracted to have images of flowers, lanterns, trees, Japanese houses, and distant mountains, figures of women in Japanese kimonos with wide silk sashes, some holding umbrellas. The first painting of this nature was created 12 years ago and the subject has since remained in my repertoire of work. I use oil on canvas, wood, board, paper, ceramic tiles and some slate. I build all my own stretcher frames and prepare all the surfaces that I paint on.

I have been invited to talk about my work at galleries, radio programs, television interviews, magazine articles and newspaper articles throughout my career. One comment I regularly hear is that my work is colourful and imaginative. Viewers cannot exactly put their "finger" on it, but they state to experience the feeling that they associate with themselves. We all live on this earth and experience other planes of perception to better understand what the unconscious right brain is telling us. I am very much interested in the fourth dimension, environmental philosophy, poetry, science the universe, spirituality and mystical associations with the natural world including plants, animals and the earth.

Recently I came back from my sixth painting trip in search of a place to live and set up my studio in Conception Bay. Then I went again on my seventh trip, this time to Bay de Verde and Carbonear, in search of the same. It was during this time I went to Wales, U.K. for two weeks of plein air painting experience by the Irish Sea followed by a week in London where I caught up with "what's new in art at the galleries." On my eighth trip to Newfoundland in the summer of 2013 I drove to the west coast of Newfoundland taking the ferry from North Sidney, Nova Scotia to Port Basques.

Artist's Bio
I was born in Chelsea, Massachusetts on April 2, 1948. The family
consisted of my eldest sister Eleanor and parents, Harry and
Goldie, we all lived in Everett, not far from Chelsea. Then along
came Susan in 1952 and then Vivian in 1959. That was the year my
father got sick and died. I was eleven years old when my mother
agreed to move back to Montreal where she was born.
My grandmother owned three tri-plexes, one on Esplanade Avenue, one on Duluth Avenue and one on Durocher Avenue. This is where my sisters and I and my mother lived, at 5937 Durocher Avenue in Outremont, Quebec. The multi-cultural street bounded by Lajoie and Bernard, consisted of French, Jewish, and Greek cultures. The whole area was made famous by such writers as Mordici Richeler. This is where I met Philip Hankin. He lived two streets away on Querbes Avenue. It wasn’t long after we met that the two of us moved away to Toronto and then married a year later. Four years later we moved to the Niagara Peninsula on the Canadian side.

My father was an artist. My father drew detailed pen and ink drawings of horses he saw at the racetrack. I used to accompany my father to the track while he drew. Later, in Montreal, I remember drawing trees, flowers or full landscapes, especially by my favourite spot not far from where I lived, on Mount Royal, I was aware that drawing seemed easy for me. I became interested in art being by my father’s side and rendered little pen and ink drawings like he did. Later I experimented with various papers to get the right effect. This progressed to sgraffito. This is a drawing scratched out with a sharp object on prepared masonite board. The board was randomly painted with various values of Indian ink and then scratched out with a one-edged blade. The end result of this type of drawing resembled an etching.

Even though I was painting and drawing on my own since a child, at 33 years old I was encouraged by Philip to register at Brock University in the Visual Arts Department. After I graduated with an Honors B.A. in Visual Arts I worked for ten years in my studio. My career developed quickly because of my enthusiasm and energy. Large paintings became the norm, showing at American and Canadian galleries both solo and group. A local art gallery then asked me to instruct adult art lessons. Later, I accepted several teaching contracts from Mississauga to Niagara Falls, Ontario, European painting trips were offered after I came back from my own plein air painting trip to Spain. I returned to Spain with students and then I discovered another place to paint and that was Newfoundland. I call my style, Contemporary Realism.