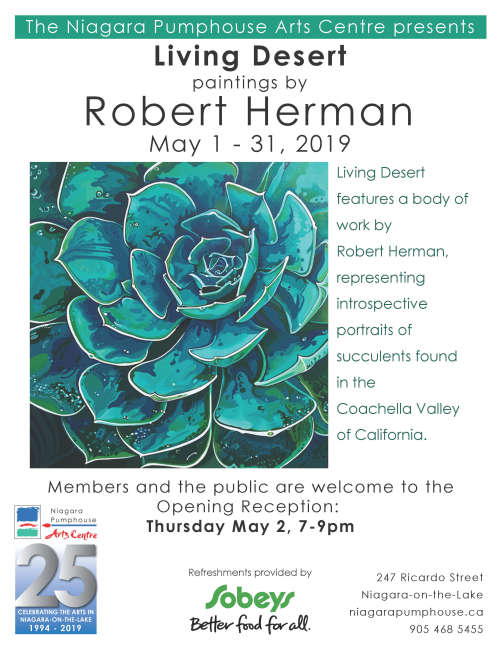 Living Desert features a body of work by Robert Herman which represents a collection of introspective portraits of succulents found in the Coachella Valley of California.
Please join us for the Opening Reception on Thursday May 2, 7-9 p.m.

Artists' Statement
The current body of work explores a collection of desert succulents, through the medium of acrylic on canvas. Each painting is conceived from an autobiographical photograph, utilizing mere inches of the plants surface. The inherent individuality is drawn from the unique beauty found in each form. Presented like ancient mandalas, the square image contains a circular shape with a central point, displaying radial balance. The architecture of each symbolically depicts the complex geometry of the universe and the forces that drive it. Examining them in an intimate manner and focusing on the subtle nuances is deeply meditative. Moving mentally towards the centre of the physical forms, the viewer begins to understand the transcendental energy they hold. Within the confines of a hostile desert environment, these plants share the heroic ability to persevere. Each adapting to the elements in its own unique way. Although representational in nature, there is a calculated boldness in the interpretation of each piece that is both alluring and enlightening.