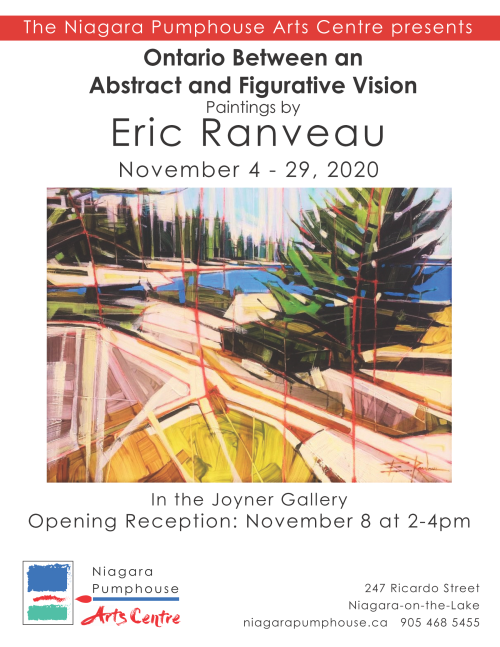 Join us for the opening reception of Ontario Between an Abstract and Figurative Vision: Eric Ranveau, Sunday November 8th at 2:00 p.m. The exhibition runs until November 29th at the Joyner Gallery.

Artist's Statement
I look for the common thread between figurative and abstract art. Where does the first end and where does the second begin? Over time it has been stated; "You are abstract!" or "You are figurative!" In fact, I am drawn towards both styles and inherently the combination has evolved into a unique expression of how and what I see in the world around me, through colour, shapes and refraction. So, why this style? As a French master once said to me at the beginning of my career; "The most important and essential part of creating is to find pleasure when you paint” To create can sometimes drive you to a love/hate relationship within the creative process, but there is always joy in the end. As a current mentor has recently said “Leap and the net will appear.” Everyday spent in my studio I push myself to find the energy to jump. As an artist I strongly believe we as a society have a social responsibility as the guardians of this planet. Today’s escalating environmental issues deepens a sense of obligation and urgency to respect, capture and share the authenticity of this planet.

Artist's Bio
Eric Ranveau was born in 1966 in Chateauneuf-sur-Charente near the wine district of Cognac, France, and raised in Barbezieux-Saint-Hilaire. He studied fine arts in Angouleme, France, and at the National Art School of Paris, France. His career as an artist started in 1989; his unique style attracted the public eye and gave him the opportunity to establish a following and to have collections represented in France, Canada, Germany and Sweden. Eric left Cognac in 2006, came to Canada, his wife’s native country and with a new perspective and influence from Canada has continued his art career in Hamilton, Ontario. His unique style of work was immediately embraced by art communities, which afforded him many opportunities to be approached by recognized galleries and art collectors within Canada and abroad. Eric recognizes that his art is a lifetime evolution and continues to seek inspiration, guidance and teachings under other known and prolific artists such as Lila Lewis Irving.