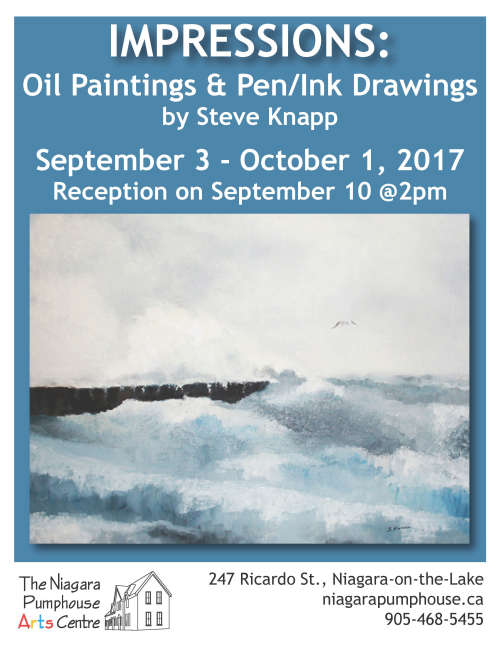 Please join us for a wine reception on Sunday September 10, 2 p.m. Everyone is welcome. The exhibit is on display September 3 - October 1, 2017

Artist's Bio
From an early age Steve's interest in art was inspired by his father who had received formal training in drawing and watercolour painting. The techniques he learned from his father were invaluable but oil painting was his preferred medium.

In his early twenties Steve worked along with fellow artists Bob Blenderman and Fred Schonberg and this led to exhibits in various galleries in the Kingston area.

In 1981, the opportunity to work as a subcontractor in the graphics industry in Toronto was offered to Steve and even though other artists told him that his pursuit of fine art would suffer, he decided to accept the offer. While living in Oshawa he continued to draw and paint and in 1983 he had his first one man show in the Link Gallery at Edwards Gardens in Toronto.

His career in graphic art took on greater responsibilities such as doing design work for 3M and eventually opening his own graphics business with his son Richard as his partner. Their business involved not only designing but manufacturing and installing graphic materials in various applications Just before retiring and turning over the business to his son they were able to design 4 facilities for the LPIA International Airport project in the Bahamas. The design was awarded first place and this led to designing and manufacturing of logos, signage, and interior graphic panels for 5 more stores in the Bahamas.

While this business was exciting and kept Steve busy, now with retirement he is able to concentrate more on his passion for fine art.