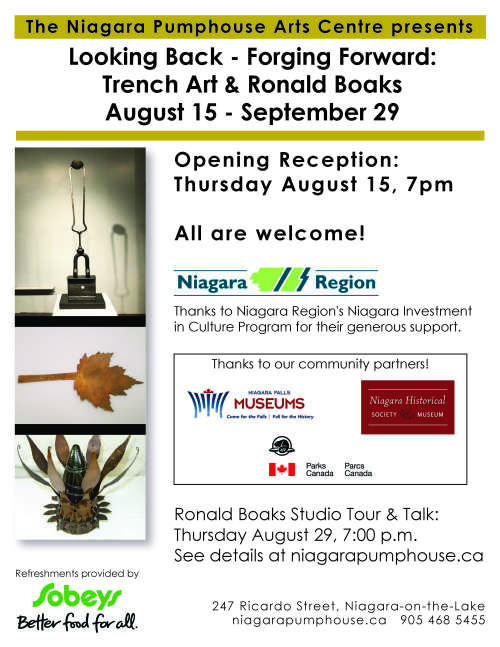 Niagara-on-the-Lake artist Ronald Boaks has created a series of intriguing sculptures from pieces of metal and other material salvaged from junkyards and elsewhere. The sculptures are displayed alongside both utilitarian and artistic objects crafted by soldiers in the trenches during the Great War, 1914-1918.

“There are some similarities between my methods and trench art,” says Boaks, noting that his creative process starts with seeing the relationship between objects.

“The biggest difference is that the soldiers were under extreme duress that could be escalated at any time. Thanks to them, I do it in peace – definitely a luxury.”

Looking Back – Forging Forward is presented by the Niagara Pumphouse in partnership with the Niagara Historical Society & Museum, Niagara Military Museum and Parks Canada, all of whom have loaned trench art pieces for the exhibit.

Inspired by Niagara’s history, the exhibition is part of a series of educational, pop-up art installations offering opportunities and art experiences for all ages and interests, through the generous support of Niagara Region’s Niagara Investment in Culture Program.

“The difficulty is in creating something with character that makes the viewer see the result as such, rather than just a bunch of stuff stuck together,” Boaks says. “Like a good illustration or painting, the sculpture takes you elsewhere.”

Boaks will host a group of 10 people on August 29 to tour his studio to collaborate in producing a layout for a sculpture to further their appreciation for the process of additive/subtractive sculpture.

I have had the freedom to make art since I was a boy, when I was given the paintbox of artist W J Hopkinson after he died. I taught myself how to paint - how paint works and conversely what does not work. I alternated between abstraction and realism until I settled on abstraction as the most compelling direction for me, to arrive at a joyful result. I eventually began working in 3 dimensions, carving and painting pieces of wood. Today my two dimensional work includes painting, collage and photography and my sculptures are assemblies made from a variety of materials including metal, wood and clay.

My objectives have been very consistent over my professional career – beauty, balance, desire and humour are ongoing themes in all of my work.

What am I looking for? I want to create something with integrity in both form and idea, that has meaning to me and clearly goes beyond just a grouping of diverse pieces or images. Sometimes they are figures and sometimes they are allusions to something abstract that challenges the viewer’s imagination.

My sculptures are assemblies of found pieces. I collect discarded objects which reek with potential; pieces that lend themselves to reinterpretation – that easily take on a new identity when combined with other pieces. I primarily use steel and wood, but also have used ostrich eggs, winged hood ornaments, cattlehorn, and antlers. The idea is to create something new. Interpretations may be primitive or they may be sophisticated, or both playing off of each other.

I want viewers to relate to my work in a way that makes it personal to them. I want the viewer to feel joy. I believe that the success of any work of art lies in its being “alive now”. It may take time to absorb it, but it will reward the viewer with each subsequent viewing.